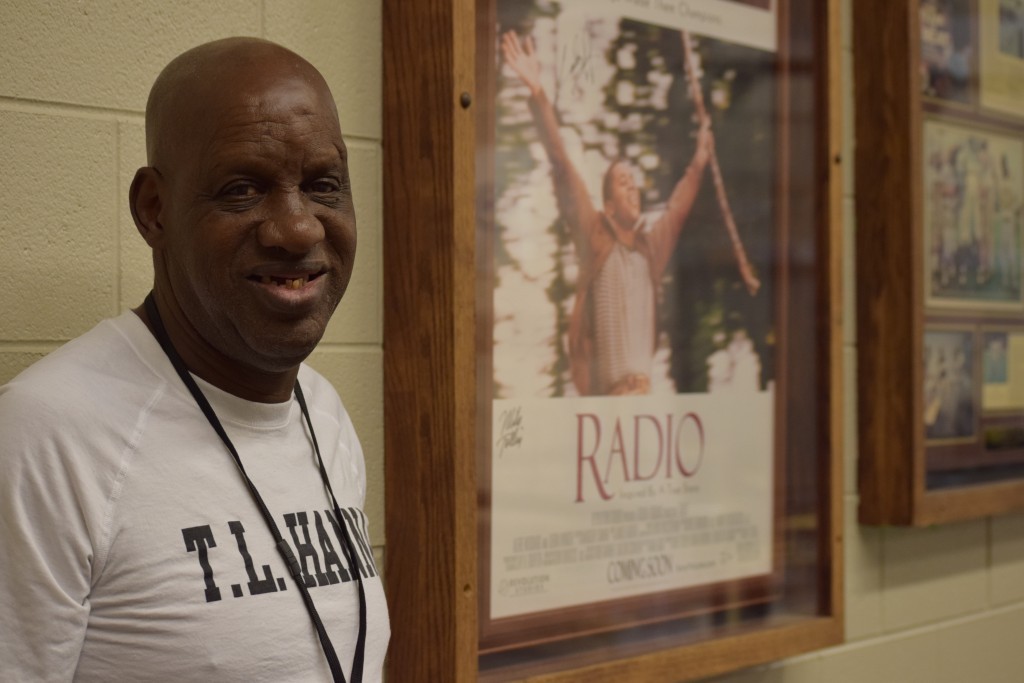 Life is full of ironies. One would think that most high schools have at least one famous student who has brought great recognition to the institution. Maybe it is a student who graduated from Harvard, maybe one who won the Pulitzer Prize for journalism, maybe a famous professional football player. T. L. Hanna has had all of these, but none can come close to their most famous “student.” James “Radio” Kennedy, a 69-year-old, mentally challenged man, showed up on football field in the mid-1960’s and has been an integral part of the school ever since. At that time, he was a teenager, with a transistor radio seemingly attached to his ear, who could barely speak and had never learned to read or write. He was nicknamed “Radio” by the coaches and players. He became a fixture at football practices, standing passively and watching, until one day when he began to mimic the coaches’ signals and tried his hand at yelling out commands. At that point, he could have been labeled a distraction and sent away. But he was not. The coaches embraced him, and as coaches came and went, someone would always take over in caring for him. Eventually, Harold Jones took the job and has been his “daddy” ever since.

Generations of Hanna students and faculty have had an opportunity to know Radio. Everyone has a story to tell, some of them priceless. His eating a cooler full of sandwiches that had been made for the team and stored safely on the bus; his pass-kick-and-throw half-time shows; his permanent status as a junior, with no threat of graduation; and his astounding ability to name the mascot of any team in the state. The stories could fill the pages of a lengthy book, each showing the child-like innocence and loving heart that exists within him.

It would be easy to talk about all the school has done for Radio, but the miraculous thing about this story is what Radio has done for the school. It is perhaps a lesson of which all of us need to be reminded. Because he was embraced by caring people, he was stimulated to learn. Because he was loved, he found his place in the world. Because people looked past his disabilities and imperfections, he found a way to make his own unique contribution to the world. What a lesson there is to be learned here. How many lost souls could be saved with a little care and attention? The thousands of students who have made their way through the halls of T. L. Hanna over the years have seen the results of the love and caring given to Radio. He has a permanent smile on his face. He is never without his ability to shake hands and hug necks. He returns exponentially whatever love is given to him. And here the irony rests. He gives back much more than he has received.

Today, after Sports Illustrated, Readers’ Digest, ESPN, CBS News, and numerous other media, have told his story, we are about to watch a movie with Hollywood’s finest actors. It is miraculous how a disabled child in a grocery cart riding the hills behind the old McCants could have arrived at this point.

It was destiny that he arrived on that football field some forty years ago. He is without a Harvard degree or Pulitzer Prize or professional football contract, but his fame has surpassed all of these accolades. And the story is simple: love and compassion can change lives. It has changed his, and, in return, he has changed ours, and we are better people for having known him.