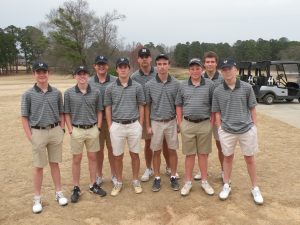 Late season region golf matches mean a little more. Everyone getting in line for the region tournament in late April. And so the Jacket victory against a sneaky good Greenwood team Thursday was all the sweeter. The guys shot 154 (2nd day in a row:) to Greenwood’s 158, 2 shots better than their March appearance at Cobb’s Glen. Greenwood’s Mason Piontek was the medalist playing 1 under par. The back end of the Jacket lineup was especially good. Senior Nick Walker shot 37. Sophomore Charlie Anderson shot 38. Sophomores Connor Rekito and John Quarterman shot 39 and 40. Next up the Wren Invitational!