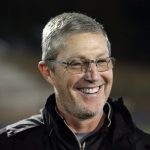 Today T.L. Hanna Head Football Coach Jeff Herron announced his retirement. In a meeting with coaches and players, Coach Herron thanked the T.L. Hanna community for their support over the last two years, and announced that current Offensive Coordinator and Running Backs Coach Jason Tone has been named the new Head Coach. “I can’t think of a better place to end my coaching and teaching career,” said Herron. He continued, “The administrative support of Principal Tobin, Superintendent Wilson, and Coach Cann (Athletic Director) has been more than any coach could ever hope for, and the great students, parents, faculty and staff of T.L. Hanna create a truly special community.”

Athletic Director John Cann stated, “It has been an incredible journey working with Coach Herron the past two years, his leadership and coaching abilities elevated us to the top.” He also elaborated on the hiring of Coach Tone, “being a protégé of Coach Herron, Coach Tone will continue building on the foundation that he has been a critical part of the last two years.”

On staff at T.L. Hanna the previous two years, Coach Tone has extensive experience being a part of winning programs, and previously was Head Coach at Worth County High School in Georgia. He has also been a part of multiple State Championship winning teams in Georgia, both at Lowndes County High School and Camden County High School. Many of those successful seasons not only ended in State Championship victories, but also high national rankings. Said Coach Tone, “I have had the pleasure of working for Coach Herron for seven years, and during that time I have had the opportunity to watch and learn from an amazing leader of young men.” He continued, “two years ago I took a huge leap of faith and followed God’s will to T.L. Hanna, and these past two seasons have been some of the greatest of my career.” He finished by adding, “I look forward to building on the foundation of success that Coach Herron created, and I am extremely excited for the opportunity to be the head coach at such a historic and storied program.” 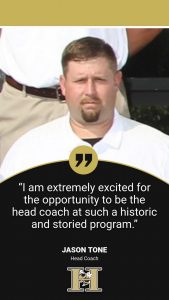