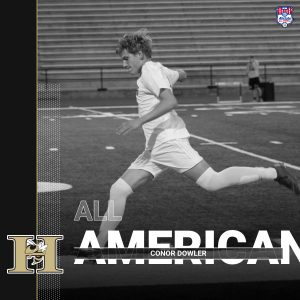 Conor Dowler was selected as an Allstate All-American which is a list that contains the top 125 high school juniors from across the country.  Already an All-Region I-AAAAA player, Dowler finished this season with seven goals/nine assists and was named as the team’s MVP.

Already committed to play for one of the top colleges in the United States, Furman University, Conor has a linage rich in international soccer.  His grandfather played professionally in Canada.  His uncles and father all grew up in Ireland playing before they played in college in the United States.  Conor also has a an uncle in England is also a soccer coach currently.

Dowler is a member of the Carolina Elite Soccer Academy in Greenville where his team recenty won a Mid-Atlantic Conference Championship and he scored 12 goals and had 4 assists.  He will lead his team as they are competing in Nationals held in Chicago in June.